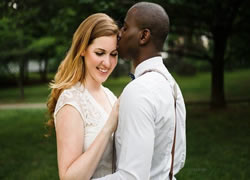 In years gone by, interracial dating was frowned upon by many people. Many, particularly older people who were brought up in a certain way, felt that races shouldn't mix when it came to dating. As a result, many mixed-race couples faced a lot of pressure from others. Fortunately, these days interracial dating is no longer an issue for most people. Society has changed a lot over the years and relationships between black men and white women are now pretty commonplace.

So, why is interracial dating no longer a big deal? Well, one reason is that the views of society and ethics have changed. People have learned to embrace diversity and different cultures and become far more accepting. Another thing is that much of the stigma of the past came from misconceptions and were fuelled by older people who were brought up not to accept interracial relationships. However, today's older people are those who were brought up in a society where interracial dating wasn't a big deal.

How do interracial couples get together?

Like all other couples, interracial couples meeting in different ways. Some may have been brought up together since childhood and others may have met through school or college. Some may meet while working together or because they have the same circle of friends and see each other as a result of that.

Another way in which interracial couples often get together is through dating sites. This is a very popular form of meeting a different race partner and can be very effective. For instance, many white women may prefer black men and vice versa. However, if they do not know a suitable person that they are attracted to, they can turn to dating sites to find the ideal partner.

With interracial dating has become widely accepted, there are even specialist dating sites available for those looking for a different race partner. Many people use these sites because it enables them to find someone that has the same goal – to meet and date someone from a different race and be involved in an interracial relationship. These sites also offer the bonus of allowing the two people to get to know one another and learn more about one another before making any decisions. When it comes to interracial relationships, it is important to remember that it is not just appearance that differs. It runs deeper than this, as there are different cultures involved. By using a dating site that caters to interracial couples, it is possible to learn more about the culture, opinions, and likes of the other person before actually going out on dates.

Why many people prefer interracial partnerships

There are many reasons why people prefer to be in an interracial relationship. For some, it is about appearance and they simply prefer the look certain people. For others, it is a combination of culture, appearance, and personality.