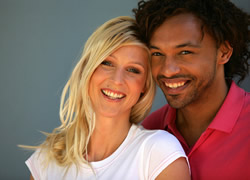 Interracial dating… once taboo, now a norm. Today, a black man can love a white woman, or a white man can date a black woman, and nobody bats an eye. No longer do you need to worry about people spitting in your face or trying to break you apart.

That doesn't mean everything is copacetic. You'll still have to overcome difficulties from time to time, and if you're a white woman who wants to date a black man, there are a few things to be mindful. After all, you've got to remember there are still cultural differences and the bigotry to contend with.

6 Types of Black Men You Could Date

Not all people are the same – men and women – but did you know that black men tend to have more layers than other people? It seems strange to say that, but not all black men are the same, that's for sure! After all, you have your player, militant, couch jockey, sporter, preacher and old schooler.

When it comes to the couch jockey, you may need to do some prodding to get him off the couch and away from the TV and game systems. The effort, though, is well worth it. If he finds you the kind of woman he could spend his time with, he may just give up the couch and the TV for you.

The militant is the one willing to embrace all challenges and meet them head-on. He is the type of man who focuses on causes – any kind of cause he feels passionate about. He's not always open-minded about interracial dating, and he may be shocked to learn that you'd want to date a black man. However, with a little persistence on your part, you can get him thinking about you to the point where his mother's voice about dating white women is non-existent.

If you decide that a black man is someone you could spend some time with, it's important to keep the old schooler in mind. This is the person who loved the early hip-hop music and Soul Train days. The old schooler tends to be a lot of fun, entertaining you with the recollection of his past days. He is the kind of black man that loves holding doors open for women and treating them like a queen.

This is the man you find at the club pretty much all the time and for a long period. When it's time to shut down, he's going home with some arm candy. This is the kind of man who is not ready to settle down and play house. For the player, it's all about looking like he's important for the hour or night until something better comes along.

Of course, if you're the kind of woman who wants that, then the player is what you may be after.

If you're going to "date" a black player man, you need to be strong-willed and ready to put up with stuff.

This is the black man who knows his Bible inside and out – he may even be a preacher. He's got a verse for everything and won't mind sharing it wherever he is. If you're into the spiritual, then this black man is for you. Bear in mind that he's all for following old-fashioned values, and you're liable to get a sermon each time he thinks your skirt is too risqué.

Chances are, you've noticed the relationship black men tend to have with sports. And, it's not uncommon for a black man to put relationships on hand to watch a game or even be involved in the sport of choice – if not, most of them. If you want to date a black man and are forcing him to choose between you and it, you're going to be on the losing end of the demand.